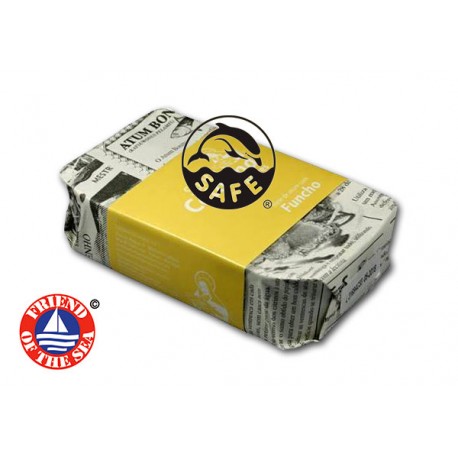 Heir of an old cannery tradition we bring to you the best tuna fish prepared according to artisanal methods used by the old cannery masters.

This product is no longer in stock

Pioneers in the value of the sea and environment

The classification “Dolphin Safe” and “Friend of the Sea”

As ecological recognition and appreciation, tuna fishing in the Azores, known as “Pole & Line” is certified since 1998 by the nongovernmental organization Earth Island Institute as “Dolphin Safe”, due to its lesser predatory characteristics, and since 2001 as “Friend of the sea”, the first tuna fishing method in the world to be awarded such certification.

As it is an artisanal method, the “Pole & Line” fishing requires all the experience of the Island’s fishermen. They begin by detecting the presence of tuna through binoculars. Then, they make their approach, turn off the engines and turn on the showers that simulate the escape of small fish, from which the tuna feeds, which hides the fishermen from their field of vision. After, they throw the bait overboard to attract the school and start the fishing activities. It is an example that allows fishermen to catch only enough fish without endangering other species or smaller fish. Unlike what happens in trawling practiced by large commercial fleets, the centenary arts of “Pole & Line”, practiced by the tuna boats of the region, are considered environmentally friendly, because they allow the fisherman to choose the fish and thus preventing unnecessary catches.

The global trend towards the exploitation of tuna by large commercial fleets is countered in the Azores by a commitment to quality over quantity.

The tuna fish is caught on the Azorean sea, using the Pole and Line method (1 man, 1 fishing rod, 1 fishhook, 1 tuna fish) without any sort of predatory activity, being the only fishing method to be considered Dolphin Safe and environmentally sustainable. It is then manually laboured in the factory.

The tuna fish is manually laboured, as well as the peeling and preparation of all of the ingredients for the tuna paste, as well as filling the containers and labelling them. 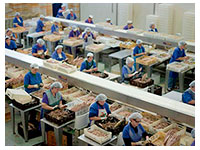 All of our tuna pastes are manually laboured, without any kind of emulsifiers, sweeteners, preservatives or any sort of additives or technological aids. Thus, it’s basically a handmade product.

Its ingredients, such as the milk, onions, peppers, garlic, parsley, red pepper paste, etc., all have their origin on the Azores islands as well, where all of the ingredients on this recipe are grown and cropped. Once again, this is an exclusively handcrafted product, where the onions, garlic and parsley, are all manually cut with all the love and care of the Azores people.

Thought to have originated in Southern Europe and Mediterranean regions, fennel is an herb with a mild but distinctive licorice flavor and fragrance. Although it still grows wild in surprising places, fennel is cultivated extensively in the U.S., France, India, and Russia.

Ancient Chinese medicine found beneficial uses for fennel, from congestion to conjunctivitis, to stimulate the appetite and increase the flow of breast milk. Essential oil of fennel provides upset stomach relief, and tea made from ground fennel seeds is believed to be good for snake bites, insect bites, food poisoning, and soothing a sore throat.

A mainstay in Mediterranean and Italian cuisine, fennel is slowly making a name for itself in a meat-and-potatoes world. A simple recipe to try might involve slicing or chopping the white fennel bulb into "matchsticks" or cubes as an addition to savory vegetable salads; steam, roast, or sauté the bulb and add to soup or casseroles, or combine the leaves with rice or pasta along with olive oil, over baked fish.

Like most plant-based foods, you'll find fennel to be widely beneficial not only in the kitchen, but nutritionally as well.

The long, graceful fronds above the fennel bulbs contain a number of important vitamins, such as pantothenic acid, pyridoxine (vitamin B6), niacin, riboflavin, and thiamin. Phytonutrients in fennel seeds and bulbs include the flavonoids rutin, quercitin, and kaempferol, all antioxidants which resist infection, aging, and degenerative neurological diseases.

But the most important nutrient in this vegetable might be anethole, a component in the volatile oil of fennel and one of the most powerful agents against cancer occurrence, possibly due to a biological mechanism that shuts down or prevents the activation of NF-kappaB, a gene-altering, inflammation-triggering molecule.